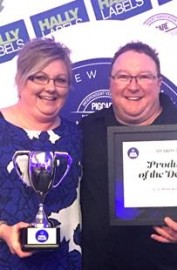 Pork Producer of the Decade

Over fifty top New Zealand butcheries entered products to be judged, with a total of 223 entries.

Selwyn’s Ellesmere Butchery owners Chris and Sue Brown attended the ceremony and were understandably very proud to have won awards in five of the seven bacon and ham categories, these were:

The evening ended with Ellesmere Butchery receiving a special award – ‘The New Zealand Pork Producer of the Decade’.

This award was to mark the ten year anniversary of the awards with points given for every award gained over these years; one for a bronze, two for  silver, three points for gold, and five points for supreme.

Ellesmere Butchery had accrued forty one  points over the ten years with, one supreme, seven golds, seven silvers, and two bronze awards.

Chris had not entered the Butchery in the competition for the last two years, but he commented, “this year was too tempting and with six awards it was a result that Sue and I are extremely proud of.”

Ellesmere Butchery is a small butchery which has been run by the husband and wife team since 2006 and they have two part time staff who assist them. There is a factory on site that is equipped with a range of modern machinery that helps them to produce products that are sold all over New Zealand.

The Ellesmere Butchery, situated in Leeston, was first established back in 1886 as Leeston Butchers. It has spanned three centuries and is a well established part of the local community.