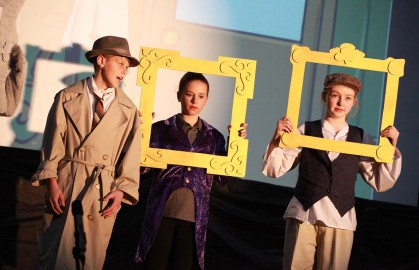 Every four years at Clearview Primary the Year 5-8 students participate in a production.

This year it was all about ‘Porridge’. The production involved a crime wave hitting Happy Valley and a caseload of mysteries to be solved! Who’s stolen Ma Hubbard’s recipe book? Who’s kidnapped Marigold the cow? And what secret was Papa Bear hiding behind his Porridge empire? It was down to Private Detective Jack Spratt to uncover the terrifying truth in this tale of mystery, mayhem and breakfast cereal!

The production journey began in Term 1 with the Production Team selecting the script and running auditions with over 100 children trying out for forty-five roles.

Roles were assigned and during terms 2 and 3 the cast had lines to memorise and actions to learn by attending many lunchtime rehearsals.

Finally, on September, 12th and 13th the hard work and dedication from everyone involved all came together and culminated into four unforgettable shows held at the Rolleston College auditorium.

Along with the main cast, all 350 children in Years 5-8 enthusiastically performed their class dance on stage.

The production was enjoyed by everyone, both those involved and those watching the show.