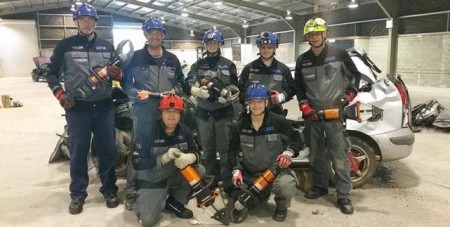 The Australasian Road Crash Rescue Challenge (ARCR) has become one of the most important events to Road Crash Rescue (RCR) teams throughout New Zealand, highlighting the increased number of road incidents, volunteers are being asked to attend.

The teams participate in national and regional challenges during the year which provides them with a unique learning opportunity to practice rescue and medical response skills in true-to-life scenarios. These events are run in accordance with the rules and guidelines laid out by the Australasian Road Rescue Organisation. Rolleston Fire Brigade RCR team took the title for the winning team in the South Island and then competed at the Australasian RCR Challenge which this year was held in Hamilton (July 20th – 23rd).

The teams consisting of six members, including a designated team leader and a medic, have to race against the clock to extricate and treat patients in simulated road crashes. While doing this they are being scored on their techniques, as well as three surprise scenarios: Controlled, Time Critical and Entrapped..

The Rolleston RCR  team thank their Sponsors for their support and the United Fire Brigade Association  for funding the team and making the competition possible. The team recognises the endless support of their families, as well as their Brigade and employers.

The team had a great competition and felt that they gained a lot, especially from the learning symposiums.