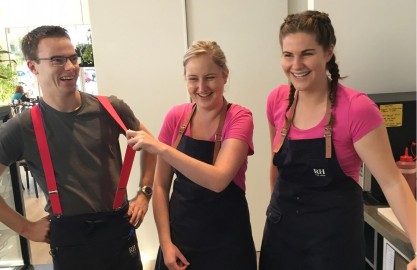 New Zealanders have teamed up with the popular Robert Harris Café network to raise a significant amount in the fight against breast cancer.

Over the last three years, with the help of their customers nationwide, Robert Harris Cafés have reached their target of raising over $100,000 for the New Zealand’s Breast Cancer Foundation.

Recently, customers were able to contribute to the Pink Ribbon Breakfast campaign, simply by ordering off the breakfast menu, where 10% of their purchase was donated to the charity.

Forty two Robert Harris cafes raised over $50,000 this year, resulting in their total contribution to the NZBF being over $115,000.

Breast cancer is the number one cancer for women, with around 3,000 New Zealand women and twenty men being diagnosed each year.

Evangelia Henderson, Chief Executive, New Zealand Breast Cancer Foundation, said; “When Robert Harris first decided to support the Pink Ribbon Breakfast three years ago, we didn’t know what to expect. To have raised $100,000 in three years is phenomenal – that kind of money makes a real difference to breast cancer research in New Zealand.

We’re so grateful for their support and we’re looking forward to working together again in 2017.” The Rolleston Robert Harris Café got well and truly into the swing of things too – clad in pink (you’ll have to believe us on this!), they worked hard to add their contribution to the amount handed over. In fact the Rolleston Robert Harris Cafe contributed the second highest amount to this year’s donation for the New Zealand Breast Cancer Foundation, out of the 42 participating Cafes. Over a dozen local customers got involved with their friends and family, and hosted their Pink Ribbon Breakfasts at the Café.

So supportive were the local community of the cause it resulted in the Café selling over 1,400 breakfasts alone throughout the fundraising month.

Fiona Stirling, owner of the Rolleston Robert Harris Café commented, “we have taken great pride in being involved with the Pink Ribbon breakfast campaign and it has been wonderful to be able to raise money for the Breast Cancer Foundation. It was a delightful way to christen our new look café, and all the staff loved getting involved and dressing in pink!”