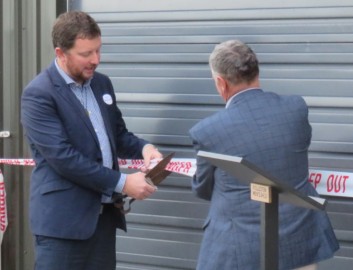 On Thursday, May 9th 2019 the extensions to the Rolleston Men’s Shed were officially opened. This was an opportunity to celebrate our growth and to thank a number of our supporters who attended. The Shed’s Chairman, Stephen Ruston explained the work done and thanked the donors who financed the extension. He then handed over to the Selwyn District Major, Sam Broughton to officially cut the ribbon, using a pair of vintage shears.
The extension to the woodworking section has allowed machinery to be allocated to its area and for assembly and cleaner operations in the other section. This has opened up the areas for jobs making finding bench space to do a job on, much easier.

After the opening, the gathering then viewed the Shed’s woodworking sections with a wide range of items made at the Shed on display. Also on show were a couple of the art statues for Rolleston.

This was followed by afternoon tea.