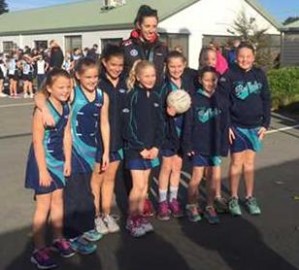 Approaching the mid-point of round three at Selwyn Netball Centre (SNC), Rolleston Netball Club teams/players are continuing to enjoy some tough challenges and some great successes. After the completion of the second round the Club have three teams in first place, two at second and four in third.

A number of players competed for Selwyn teams at various representative netball tournaments (by age group) over the school holidays, with some fantastic competition and experiences had by the girls. We are looking forward to some more great competition in the third round!

Also, during the second round SNC was lucky enough to have some of the Tactix players come down one Saturday. Our Year 5/6 teams; the Ravens, really enjoyed warming up with Bailey Mes.