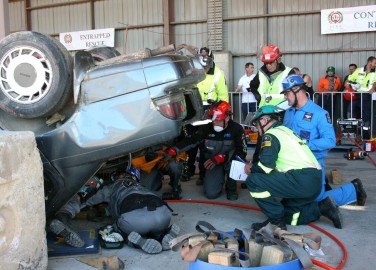 The gruelling rescue challenge took place in Milton, Otago and tested the teams to their limits mentally and physically.

Seven teams from around the South Island attended the competition which is run by the United Fire Brigades Association.

There are three categories of scenarios:

All of the above scenarios have a time limit of thirty minutes for completion. Teams are judged on skills, communication, medical, and extrication of patients.

In addition to this, the team medics are judged on administering care to a patient in a medical emergency. Team medics have just fifteen minutes to complete this assessment.

The Rolleston RCR team defeated the competition to win the Entrapped and Time Critical events, they came second in the Controlled event and third in the Trauma event.

Teams are also scored on individual roles which are tallied at the end of the event.

1st Technical (which is based on the skill of the guys on tools, how they approach the extrication and deal with any problems).

The Otago/Southland regionals were also held concurrently within the competition and the host team, Milton, won this.

There has been a Rolleston RCR team since 2009. However, there has been a roll over of team members with John Trounson (Team Leader) and Marty Tier (Tools) being the only two members remaining from the original team.

The Rolleston team have  certainly built a reputation as a force to be reckoned with.  Between 2009-2016 the RRCT have won the Regional Championships, South Island Champs (twice) and also National Championships. They have also represented New Zealand at the Australasian RCR Championships four times (three New Zealand teams are sent each year).

Competitions are an invaluable experience to the teams; the skills that they learn and develop are  taken back to the local Brigades and passed on to other members, as well as used at actual rescue situations on the area’s local roads.

“The Rolleston RCR team would like to thank their families for the support that they give the team, as not only do we all have full time jobs and turn out to fire calls, but also invest a lot of hours into training for these events,” said team leader John.

The Rolleston Volunteer Fire Brigade rely on donations of unwanted cars to practice their rescue training and build on new skill sets. Anyone with a vehicle they can donate should call John on: 021 224 0771.