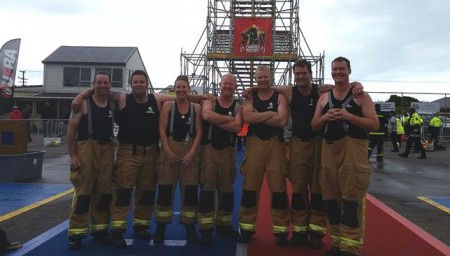 On Saturday, December 5th firefighters from throughout the South Island converged on Westport for the South Island Firefighter Combat Challenge. Hosted by the Westport Volunteer Fire Brigade, the event is described by many as ‘the toughest two minutes in sport’. The 51 competitors required a huge amount of skill and fitness as they battled through five physically gruelling tasks.

Nigel Lilley, Chief Fire Officer at Rolleston Volunteer Fire Brigade, was amazed at the level of hospitality extended to them. “Westport were fantastic hosts, working hard to ensure the rain stayed away, that the track was laid out in plenty of time and that everyone was fed and watered. The effort they put into making sure the challenge went well was greatly appreciated by all,” he enthused.

With a little bit of damp in the air, there were no record breaking times from the Rolleston Brigade and Nigel attributes this, in part, to the new high level of competition. “There were 27 new competitors to the Challenge with a number of these first time competitors ranking in the top three of their category – showing great levels of fitness and raw determination,” he added. “We were thrilled to see so many new competitors succeed.

“All Rolleston competitors finished their chosen discipline on time – which showed a great improvement in everyone’s fitness,” Nigel commented.

“There has been a 50% growth in participants at the Combat Challenge and it would appear to be attracting more and more competitors each year,” Nigel observed.