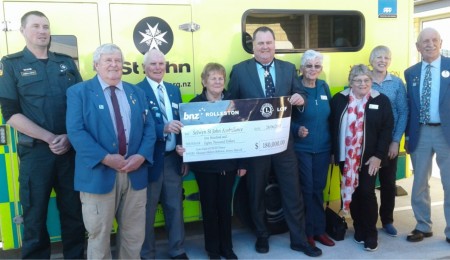 Thursday, June 28th was the culmination of two years hard work and administration, for members of numerous Canterbury Lions Clubs, when they presented a cheque for $180,000 to St John, Rolleston.

John Sunckell Chairman of Selwyn St John and speaking for the organisation said they were absolutely delighted with the Lions’ effort, which would greatly assist their ability to provide good service. They will endeavour to have a new ambulance ready to be consecrated at a special service to be held in Christchurch, this September. This will show the Lions’ emblem, plus acknowledge contributing Trusts and Clubs.

A grant was obtained from the Lions Clubs International Foundation (LCIF), in Chicago for $90,000., which ensured the success of the project. LCIF has also donated over $1 million to Christchurch City to replace Community facilities destroyed in two major earthquakes. The Lloyd Morgan Lions Clubs Charitable Trust, in New Zealand also contributed.

Westland Dairy Company, with local Dairy Farmer Peter Morrison as Chairman of Directors contributed $4000., demonstrating their commitment to community needs and to the Health and Safety of employees.

Bill said it was extremely satisfying to know the Ambulance would soon be ‘On the Road’,  and thanked everyone who had been involved with the Project. “This fits our Lions’ motto of ‘We Serve’, perfectly,” he concluded.