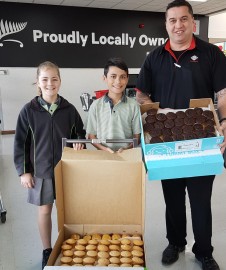 When the SPCA encouraged Kiwis across the country to get their paws messy in the kitchen Clearview Primary School took up the challenge.

The annual Cupcake Day fundraiser provides a tasty way for New Zealanders to ‘bake’ a difference in the fight against animal cruelty.

Now in its ninth year, Cupcake Day is the SPCA’s fun, community-driven annual fundraiser with all proceeds going towards protecting abused, neglected, injured and abandoned animals. Since 2009, supporters of the charity have raised more than $2million through the baking and selling of cupcakes and other treats.

All the funds raised go directly towards helping animals in the bakers’ local areas.

In SPCA centres across the country, 46,000 abused and neglected animals come through the doors every year in need of love and care.

While the SPCA Cupcake Day was August 14th, Clearview Primary School students supported the cause on Friday, August 18th. They sold around 700 cupcakes to the School community. These had been kindly made by students, teachers and parents, along with a generous donation by Rolleston New World of 250 cupcakes and icing.

A cupcake competition was held in conjunction with the fundraiser to find the best decorated cupcake.

“This whole initiative was set up and run by the school leaders (Student Kaitiaki),” said a School spokesperson.

“The event was a huge success and at the end of the day the School raised $1,110.70 all of which will be going to the SPCA.”