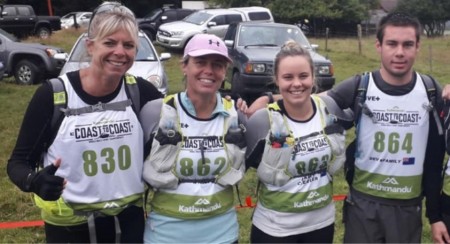 Last weekend saw the annual Coast to Coast race take place over either one, or two days; February 8th and 9th. Held every February the race starts at Kumara Beach and traverses the width of the South Island, crossing the main divide and finishing at New Brighton Beach on the East Coast.

The sun was out in force and many locals braved the heat to take on  this tough competition. There were some great results and personal bests achieved.

Kirwee local Mya Reid, a first time entrant in the Race partnered up with ex-local Wayne May to compete in the two day teams section.

This was Wayne’s fourth time competing in the Coast to Coast. Mya commented that it was an amazing experience for her being able to compete in the 2019 Coast to Coast. She found the mountain run amazing and finished in just over six hours. “The bike ride from the Gorge was definitely the hardest part as there was a head wind but it was still so exciting to get to Brighton at the end,” she added. Mya and Wayne finished 43rd overall and a well deserved 8th overall in their category.

Another local Vanessa Moore completed the Mountain run stage of the Coast to Coast with Julie and Nikita Crequer, she found this to be an awesome team to run with and it was reported that they had many laughs along the way. Vanessa

found doing the run as a team, a fantastic way to complete this challenging event, as there were always others there tfor encouragement when the going got tough. She said, it was a challenging, fun run with perfect conditions and awesome scenery. The river crossing was a highlight along with finishing in a time this group was very happy with. Vanessa unfortunately got cramp in both legs on the last half of the run, so it was a bit tough going for awhile. She is looking forward to the next Coast to Coast already. Devon Crequer placed forth in the men’s open while Brendon Crequer placed an incredible second in the vet’s section.

Well done to everyone who competed in this challenging multisport event and congratulations to all those who achieved personal bests.